Pobs and geg are working on Japanese trucks and tanks

We have palms various by Col G and VonBeerhofen

Captain Kurt will be working on ship models, aussie jim has volounteered for ship skinning

Pobs is working on the 3D carrier models

In place of the Formidable, I would suggest a fleet oiler, which can also be used for a target model in harbor for Truk and Philippines strikes.

We could replace the RR station with a tent city for a Japanese army base around the Army HQ and Barracks buildings. Alternatively could be an ammo / fuel dump.

Moggy, looking @ the vehicles...we could use Col Gibbons HR Sherman...and if you like i could look into Japanese trucks etc and have a go at the trucks and perhaps even light tank. well maybe in cooperation with Pobs as well.

and could the Dunkirk piers be reskinned, or is a few 3dz tweaks needed? just wondering.

Kurt - oiler and tent city sound good to me. I'll ammend the list.

geg - Japanese trucks sounds good. Col G/Pobs will let us know if they've already got anything going along those lines. Pobs did the Dunkirk mole, and Toney recycled it for his layout.
Moggy
www.mogggy.org
Top

OK Moggy. Just been looking at Japanese light tanks. After that ill get into the trucks etc. I think there's some Japanese staff cars out there..and Geo has some stuff on his page which could probably be used, or at least, as a starting point for some objects.

Type 97 4-Wheeled Truck
Type 97 was based on an Isuzu commercial medium truck and its parts are mostly common to these of Type 94 Truck. Type 97 was used widely as the main truck of IJA until the WWII ended. 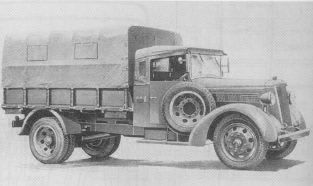 Type 94 6-Wheeled Truck
Before WWII, Japanese commercial trucks were very poor and IJA could not rely on them for military service. So, IJA supported private motorcar companies and made them develop a military 6-wheeled truck. It was the Type 94 6-Wheeled Truck. Type 94 Truck was reliable and had a good performance. Type 94 was produced in the largest numbers among the Japanese trucks and used widely until the WWII ended.

Type 93 6/4-Wheeled Passenger Car
Type 93 is the passenger car for officer. First, 6-wheeled model was developed and later 4-wheeled model was made in order to reduce the cost. The engine is the same as that of Type 94 Truck (Ko Model). 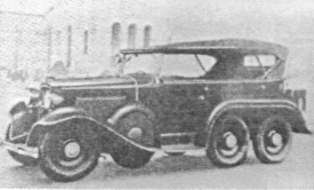 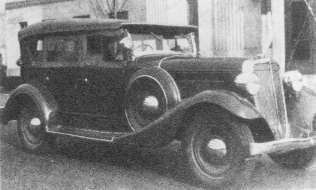 http://www3.plala.or.jp/takihome/car.htm
Has a nice listing..I'm still on the search for 3 view drawings however

Looking at those trucks geg we could pull the nose out on Shreck/Col G's civ truck to get one of those pretty easily...

regarding the mole : we could very easily reskin that as either a solid stone or a wooden wharf... the basic model will do for either ...

I have a range of skins from places like combat mission boards for wooden and concrete bunkers so they are really no problem at all..

I also have a basic 'row of trees' model developed from Col. G's GS one which might be adapted for palm trees to give the impression of plantations which seem so prevelent around towns in this theatre.....

I notice that all the 'moving vehicle convoy' slots are allocated to japanese vehicles... ?? can we do that ? do we know how to get allied convoys to be converted to axis ones using the extra slots or are we thinking of stationary targets here ??

As a matter of interest, are there to be any US land bases ? if so, don't we need a US ground target plane ?... also, we could have a US or japanese plane onboard the 'target' carriers.... by swapping them into the train wagon slots and positioning them carefully... they would move with the ship until destroyed then be left behind..... but we could raise the main model to deck height and either leave the damaged model at that height and suffer it floating behind the carrier or drop it to sea level so it would appear to disappear from the deck and the smoke source would be 'inside' the ship.... what are the views on these possibilities ?....

edit : oh and the train wagon slots.... can they be used for additional planes etc in the target files ? or can they only be used on railtracks...

I think the answer is that originally in CAW we were very much thinking of US carrier forces either battling with Japanese carrier forces, or hitting Japanese occupied islands, and in that scenario all the ground targets with the exception of US Naval elements, would in fact all be Japanese, and clearly all the land interdiction targets (trucks and the like) would also be Japanese.

As you can see from the "campaigns" post I was thinking about the possibilities of a moving frontline campaign for the Phillippines, but that would necessarily involve American ground targets, as indeed would involvement of any US land based aircraft, and some reworking of the Tmod list. Therefore if only not to overcomplicate our task, I think there is merit therefore in sticking with the original concept.

If we are going to lay out the "railway lines" as sea lanes along which DDloco type shipping convoys pass, we can't reuse any of the rolling stock tmod slots for other purposes - they must all be ships or relevant to the shipping convoys. I do like your sggestion of a static aircraft target for the convoy "target" carriers. However, I don't think we can work things so that we have different convoy slots for either side. Any of the DDloco target objects would have to be applicable to either side - a generic small carrier shape, a generic single engine fighter shape without markings. Within those confines, it would begood to see if it worked!

perhaps if we made it one of the converted freighter type of light support carriers then ?...

unless we could have the target carriers swapped depending on the choice of campaign... so a jap version for us campaigns and a US one for jap campaigns... but I dont know how difficult that may be...of course with several different carriage types to work with..... we can have several plane/ objects on the decks...

Setting up a front end manager to swap requirements for campaigns on one or other side its not particularly difficult, and would indeed be one way round that particular problem. And indeed if theplayer is making front end choices in that way, the theatre could be set up with whatever objects were required for the particular campaign. I think it's a practical proposition, if it's a road you'd like to go down.
Moggy
www.mogggy.org
Top
Post Reply
13 posts • Page 1 of 1