The idea of this projects was to use the map created for Dunkirk to model the dogfights between the Luftwaffe and the Swiss fighter force in May/June 1940. As Georing deliberately and intimidatingly flew his forces over Switzerland toward their French targets, the Swiss for whom neutrality never meant pacifism, saw only one response. Their Me109D and 109E fighter squads attacked the trespasing forces and some of these engagements were quite significant.

The more important Swiss airbases are already on the "1940 map", so no further world editing is required.

Thanks to DeanH I have the wonderful hi-res Swiss Fleigertruppe skins for the relevant 109 squads:

I need to research a bit more to discover the Luftwaffe units involved. 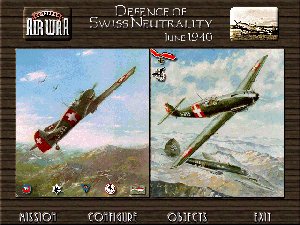 I need some hangar screens for those Swiss fighter squads, and probably some other screens in due course.

I'm hoping to find a way of swapping the Swiss files in and out of a standard Dunkirk setup without causing chaos, perhaps by using another exe setup somewaht like the Dunkirk squad mission exes to use alternative file names.

Other aircraft I was considering bringing in to this project were

(1) Swiss MS406 just comming into service in 1940. Like many other theatres this project is crying out for a good MS406 model.

The general setup may be restricted to "squad missions" similar to the Dunkirk squad missions, to simulate the actual dogfights that took place.
Moggy
The Administrator of The Gen
www.mogggy.org
Top

In order to make use of the work done on this scenario, I am currently considering whether the simplest method of release is to make an OAW package that can simply be swapped in as an alternative set of files for the Dunkirk world. Must ask Jelly what the possibilities are.
Moggy
www.mogggy.org
Top

I have been gathering the files to put the Swiss package together.

Return to “The Defence of Swiss Neutrality: June 1940”